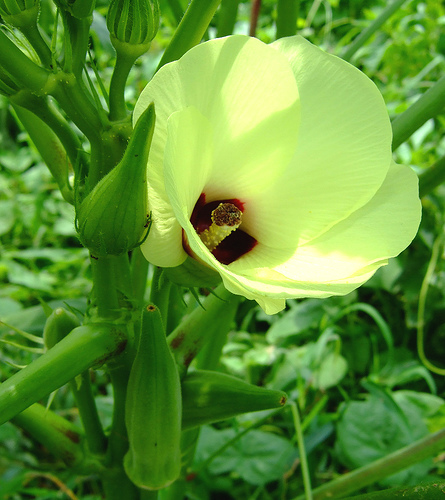 A Veggie Memoir:  also appearing as part of the Valentine’s celebration of Love and Veggies at http://www.goingveggie.com/a-month-of-veggie-love/

I looked at the ground as I dragged my feet, the old tennis shoes so caked in red clay that tying them had been abandoned last growing season.  They were now slip-ons that I wore on my death march to the garden.  I jerked the 5-gallon plastic bucket around making the paring knife in the bottom rattle, hoping it would replace the tunes that I’d been torn from just moments before.

“Wayne!” my mom had yelled from another part of the sprawling house.  “Go help Daddy pick the okra!”

Sure I liked to eat fried okra, would even bear it boiled, but why interrupt me nestled on my bed, happily listening to the stack of 45s with shoes off and clean feet wondering if Elton John and Olivia Newton-John were related, even married.

Already sweating, I hadn’t even begun with the sticky, icky process.   Dad directed me to start on another row that seemed to go on into the next county.  I glanced at the beauty of a blossom, the soft yellow pedals leading to a deep purple depth.  Then I glared at the four-inch pod next to it and sighed before taking my knife to it.

I stopped about a third of the way down, wiped my forehead on the back of my arm, and glanced back to the house where coolness and freedom waited for me.  Through the plants, I caught a sight of Dad and thought I was hallucinating.  Must be the oppressive Georgia heat.

He folded his pocket knife and slid it into his pocket before examining a small okra pod.  This made me curious, like there might be some weird insect he’d found or the latest black spot disease had turned up.  Either could mean the crop was ruined, and I could retreat to the air conditioning.

He looked at me with a mad-professor smirk.  As I moved closer to examine whatever he’d found, he grinned, parted his lips and stuck the raw vegetable into his mouth and crunched down.

My eyes grew wide in horror.  I could hardly breathe the humid air as he his eyes softly closed while he chewed. He actually seemed to enjoy it.  Then, the biggest shock – he swallowed.

He opened his eyes while tossing the stem in the dirt, “That was good.”

“Groooosss!”  The inside of my mouth tasted bitter.  “You didn’t even wash it!”

“You love okra.  It’s good like this, too,” he said offering me a pod.

Who is this crazy man, I wondered.  I defiantly rattled my bucket to prove I already had plenty of okra and went back to my row, furiously cutting pods so I could get back inside to wash the sweat and disgust off of me.

“Someday you’ll see,” he laughed as he popped another in his mouth.

Decades passed before I tasted raw okra and realized how right he was, how good it could be without embellishment.  Also, okra-au-naturale is infinitely more healthy than the corn-meal covered and Crisco-fried version, and easier to swallow than the boiled-to-bits one.  The crunch of the pod and the seeds, even the slightly fuzzy exterior, are quite good.  I love slicing it into salads with fresh corn, tomatoes, red pepper, whatever is fresh from the garden, building the salad from the greens to a layer of color so the okra will show on top.  Drizzled lightly with an oil and vinegar dressing is my favorite way to enhance, not mask, its natural beauty and deliciousness.

After first making this salad, I mentioned it to Dad.  Like before, he grinned, but this time he had a hint of “I told you so.”  I returned the grin, mine with an obvious “…and you thought you could teach a surly teenager something on a sweltering afternoon?”  I’m grateful for truths shared and lessons learned, especially when they bring me closer to loving family and taste good.  Both are music that nourishes my soul.