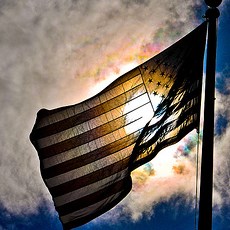 Dad carefully unrolled the recently acquired panoramic photos of his and his brother’s graduations from basic training during World War II. A tiny arrow was placed above both of their heads on the respective photos to identify them from the near hundred men.

“That’s Bo?” I asked with quiet respect. “I don’t know that I’ve seen any pictures of him.”

My 84-year old father nodded in a mixture of pride and sadness.

As he shared stories, Dad handed me a small, tattered brown folder. Inside were personal and official letters. I removed a faded telegram.

“…Private Clarence Martin Smith, Jr will be accompanied by Private. . .to the funeral home in Thomasville to arrive on December Two Four. . .”   The strict language marched as formal as a precision military formation, yet devoid of emotion.

Most of my life I’ve known Bo got an infection from a wisdom tooth extraction on base. On the transport ship to Europe, he reported ill to the infirmary on a morning before Thanksgiving, was diagnosed with spinal meningitis, and died before the next sunrise as the ship churned across the Atlantic. The family waited over a month for the return of his body. He was buried on Christmas day.

I gently blew open another envelope’s ragged end and retrieved the fragile paper inside. Seeing Bo’s handwriting and reading his words for the first time was like hearing his voice. Bo plainly wrote to his Momma about where he was, what he was doing, and how much he loved her and his family. There was also one page written just to Dad encouraging him to get a particular piece of farm equipment running and an added mention about their sweethearts. I asked Dad some questions, some of which he couldn’t remember the answers, some he simply couldn’t muster the words.

Gently folding and returning the letter to its resting place, I felt a rush of sadness—reading Bo’s words and holding his letter in my hand as I stared at his benevolent, timid expression in the photo was like meeting him and burying him in the same moment.

As I looked into Dad’s eyes full of respect for these precious artifacts, for what was and for what might have been, my heart began to grasp the depth of his loss. Through the tremble in his voice as he bravely fought to hold off the flood he’d kept in check for so many decades, I fought alongside him as he allowed me to be present with his love and loss.

It’s not a duty, but a freedom to choose to honor all who serve. With Dad, I am also grateful to witness and benefit from his choice to live every moment of his life in service to God, country, and family. He inspires me to strive to higher service in my own.