At a crucial juncture after the climactic scene when the subplot needed attention, his novel went in an unexpected direction.  As his editor, I suggested removing the newly-introduced subplot to naturally steer the protagonist to the crucial needs of the woman he loved, the only issue to be addressed for final resolution.  The author read my notes and heard my rationale, yet remained skeptical.

Weeks later during revisions, we chatted about a software challenge, and he brought up his continued attachment to the new subplot.  I further explained my emotional reaction and logical reasoning.  He stated his case from a different angle, and I could tell that it was not only important to him but also to the future of a brewing sequel. 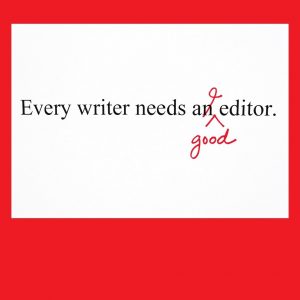 I felt an idea rise like a jolt of electricity, flashing up my spine to the top of my head.  I shared the basic premise of how the setup of the subplot could be incorporated earlier.  He responded encouragingly.  I shared the entire brainstorm.  He added his creativity to it, and the issue was suddenly a beautiful turning point, one that solved another plot issue too.

Delighted, we laughed, and then he said, “Maybe I’m naïve, but I’ve got to ask:  Is this the way a normal editor works?”

I explained good editors work differently.  After acknowledging my client’s work with editors on his other books—usually without contact beyond rote emails and corrections in the text, many of which were computer-generated—I shared about those who inspired me to do the work I’ve chosen to do.

I remembered when my high school English teacher made me editor of the yearbook.  I said, “But I don’t know how to do that,” and he confirmed, “Sure you do.  You’ll be great!”  And that was that.  I knew I could trust him for guidance.

In addition to new skills, he taught me a good editor has a fearlessness to encourage creativity’s experimentation and bold ideas in collaboration. My teacher recognized and affirmed the good, then build upon it.

Among college professors and editors for print media, corporate communications, and theatrical productions, my greatest mentor was a magazine editor who was clear in direction before I began my work and supportive in the process through revision.  Once she took her turn with my copy as she readied it for print, I was hard pressed to find her changes.

She taught me to build relationship on clear vision to encourage writers and to hone my editorial skills to enhance the writing, elevating both the writer’s voice and the final product’s intended message.

The best editing isn’t a one-way street where some unseen person puts their mark on a writer’s work.  From both editors and clients I’ve worked with, I’ve learned it’s imperative to have a friendly relationship with both the writing and the writer.  Don’t turn the process competitive or argumentative with ego.  The union of writer and editor is collaborative with clear communication, keen listening, and openness to discovery and growth.  Yes, editing is a science in the sense of the rules and formats to follow, but it’s also creative.

To the writer on the phone, I added, “This is how I work.  It works well for me and for many others too.”

He agreed, parting with the promise of a quick return of the revisions and a commitment to begin work on his next book while I edited the current one.