“I enjoy writing stories a little out of the ordinary,” said Joe Shumock, author of the new thriller Sacrifice of the Lambs.  “I’d been considering a book broaching the concept of human cloning for several years.” 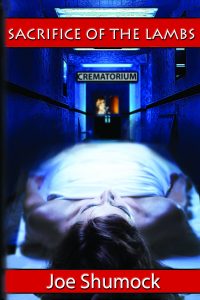 The fourth novel in his Letter Series involves returning character and retired CIA operative, Rage Doyle, who travels from his East Tennessee mountain home to Prague, summoned by a flame from his 20s upon her plea to investigate suspicious deaths of a friend and her daughter. Ensnared in both a sinister situation thirty years in the making and a rekindled love affair, Doyle uses the strength of a man half his age alongside seasoned know-how to face life-and-death deadlines, heart-wrenching discoveries, and a conspiracy to implicate him in the crimes he’s attempting to solve.

Shumock, who has been writing and publishing since 2007 after retiring from his CPA firm, smiles when he hears the catchphrase writers write what they know.  “Totally untrue of me and my stories. I have a roaring curiosity and imagination. I love imagining what can be. My characters become real, and I help them get into trouble and sometimes out of it.”

Locations are normally a character in his stories. “I picked Prague in the Czech Republic because medical experimentation was important there, and with the capital’s history and beauty, it became my choice. I began writing before traveling to Europe, and I wrote for my three weeks there.  The city enabled me to make it a part of the story.”

“Then in 2015, I met Wayne at the Decatur Book Festival. Our conversation and some time with other writers in attendance convinced me to reach out for editing help.  Wayne told me what I was doing right. The challenging part for me was the period between having Wayne say my story needed major work in areas, offering ideas, and the point where I realized he was right and I was not.

“My biggest takeaway was to listen and discuss, and then not let my pride make me wrong.  I’ve come a long way toward accepting positive criticism as an additional tool to make my novel the best it can be. I have worked with other editors, and with Wayne on this book, I found the right fit with a healthy respect of each other’s goals and what it would take to attain them.  He’s a man of many talents.”

For writers starting out on their path, Shumock shared, “If you don’t have tenacity, find something else to do. Writing is hard and must be challenged at every turn, especially during revision and editing.  Even with marketing. I’ve heard it before, and I agree: writing the early drafts of the book is the easy part.”

Next up, Shumock is finishing a children’s story, Briana and the Dog, for a spring release, and then he will begin the fifth novel in his Letter Series.  For information on Shumock and his books, visit SilverSageMedia.com or his author page on Amazon.com.