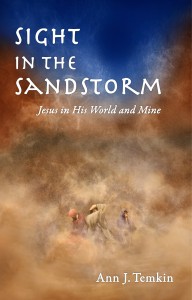 “My inspiration for this book is both my love of God and my own long, winding spiritual journey,” said Ann J. Temkin, author of the newly released Sight In The Sandstorm: Jesus in His World and Mine.

A self-described half-breed—the child of a Jewish father and Protestant Mother—Ann expressed her need to bridge her Jewishness and Jesus’ Jewishness. “Even though the historical context on place and spiritual heritage is acquired from research, it’s also in my bones and has a universal aspect,” Ann said.

An ordained protestant minister who is both a former Catholic nun and licensed therapist, Ann’s book brings Jesus and his companions to life within the rich context of turbulent 1st century Palestine. The political, socio-economic, and religious conditions of the Jewish people living under Roman rule provide moving and meaningful insight into Jesus, his life, and his teachings. Stories from the author’s life are intertwined as the combination proclaims a message transcending time and place about human struggle against oppression and a path to liberation. Sight In The Sandstorm illustrates the power of an extravagantly loving God, a God on the loose in the whole world then and now.

“While conducting research on 1st century Palestine during the last 10 years, I kept being told I should write a book. I was also told the same thing about writing a memoir.” Eventually, Ann felt she needed to honor her research and explore the Jesus story, but she wanted to write a book both accessible and relevant for general audiences of any spiritual background as well as those with none.

She joined my Creative Writers Workshop and shared her written stories with other members from a variety of backgrounds with positive results. She dabbled in memoir, too, also positive. Then, she took the challenge to see how the two could mirror one another in a broadly reflective way, and she began to play with braiding stories together. 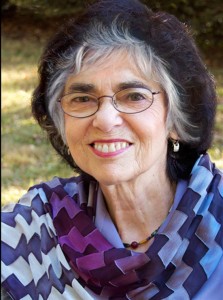 This came easily or Ann. “Integrating aspects of theology, various spiritual and life perspectives…well, I do that all the time. It’s central to who I am, as is passing it on for others to consider.” She achieved her goal of showing how Jesus has been influential through reflection and affected her life as both a Christian and a Jew. This illustration is offered to readers to apply to their lives to whatever degree.

“I love writing,” Ann explained. Though she has published in academic journals and written professionally, writing a popular book was a new mountain to climb. After a year in the writing group and a year of personal coaching through revision, final edit and production, Ann said with a confident smile, “That tape used to run in my head a lot, the one that snipes ‘Who do you think you are?’ Now I have the answer.”

Sight In The Sandstorm: Jesus In His World and Mine by Ann J. Temkin is available in Paperback and Kindle editions on Amazon.
Posted in Client Success, Congratulations, Creative Writers' Workshop, Editing, Writer's Story and tagged authors, books, clients