This guest post by Creative Writer’s Workshop member Kim Chamberlain, who is steadily making excellent progress with her memoir. Kim is a music teacher, clarinetist and jazz singer with lots of great stories. Kim can be reached at [email protected].

My writing coach’s words from a month ago reverberate inside my head: “You have four long weeks to get a lot done.”

Now, my deadline looms at midnight. In my basement writing room, twenty-seven chapters, hiding inside 2 large binders, remind me that I’ve got Writer’s Block. 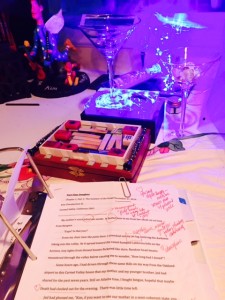 I can write. A lot. I can quickly churn out another chapter for my memoir, sending it on its way to Wayne’s Thursday night writers’ group.  I recall the ending of my group evaluation at our last meeting weeks ago:

The glow from a nearby lamp radiating off the top of Wayne’s pate inspired me to ponder the reflective quality of human skin. My mind meanders down a trivial trail into a thicket of distraction.

His mouth continued to form words. “Why not start by identifying the setting, characters and theme?”

I wonder if Wayne’s crown feels silky or maybe a little bumpy. That Yul Brenner look requires a nicely shaped head like Wayne’s.

Ann, the first published author among us, chimed in. “It may be difficult to pick five, but I learned a lot by doing the same thing.”

Back from her year-long sabbatical, a time spent publishing her book, Ann has plunged into her second work while still finding the time to promote the first one. She manages to simultaneously write new material and present workshops requiring airline and hotel reservations.

Will I even get to the editing stage?

Ann flashed a wide grin. “Just spread the chapters all around on the floor like I did. You’ll figure it out.”

She had a point. I earned my Masters in Library Science in a maelstrom, broadcasting my handwritten notes, rough drafts, markers, and pens upon a wide table in the library. The debris always managed to write itself. But writing memoir was different.

I imagined a hurricane of papers scattered haphazardly on my already cluttered writing room floor. I pouted and replied, “Well, I’ve put all 27 chapters in 3-ring binders.”

Wayne’s timer trilled, and everyone folded up their notes on my work and passed them to me.

A masterful weaver of imagery, Karen often apologizes for not producing enough. Yet her book is organically forming itself.

“I didn’t get much done,“ she confessed, as I unfolded her 2000-word entry of the week and contemplated my commentary next to hot sauce stains that I’d added at lunch earlier in the day: “Brilliant as always! You’ve accomplished so much!”

Enjoying a mini-sabbatical herself, the soon-to-be online published Hana checked in through Wayne. We learned that while she drove her son to a soccer tournament, her characters frolicked in her mind, concocting the next plot twist.

Wayne wrapped it up. “See y’all next month! Do good work!”

Flanked by my fellow writers, I stumbled toward my Subaru, noticing one benevolent star at the far end of the plum-hued sky. It was a hopeful sign.

As soon as I pulled into the carport, I made a beeline for my basement writing room.

It wouldn’t take long for my chapters to come together and form an embryonic entity, the way primordial organs adjoin in utero. By July, there’d be a memoir, a literary fetus. At group, everyone would coo, “Look! You can see all of its parts, and there’s a cute little ending. How adorable!”

Still warm from group, I hole-punched the group’s notated papers and snapped them into Binder 2.

Better start fresh in the morning. 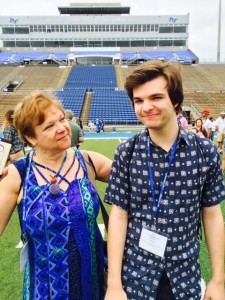 That was a month ago.

I’ve gotten a lot done over break, but I haven’t touched my memoir.

First, Dave and I spent four days with our son at his future college. Exuberant student representatives plied us with window decals, plastic coffee cups, T-shirts, and brochures. Time had to be spent to sift through it all.

Next, I succumbed to my thrift store addiction. Rather than heed Wayne’s words, I made things from purchased wooden boxes, bric-a brac, knick-knacks and picture frames. Whenever I’d sit down at my writing table, my creative brain focused on crafting.

Hmm. If I remove the glass from that picture frame and put it inside that wooden box, I could make a nifty case for my clarinet reeds.

I did work on my memoir just a bit. One day I cleared a place at my long folding table, and I skimmed a few chapters from Volume 1. Jotting down the main characters, setting, plot, and themes onto index cards, I realized that some of my work belonged in the “reject” folder.

The next day, I slammed volume 2 onto the table with a thud. I froze. I fell asleep.

Hours dribbled into days until I had less than 72 hours left.

Volume 2 just sat there—a Stonehenge monolith—impenetrable, looming and impossible. Rather than turn to another craft project for diversion, I realized that worry and grief work just as well.  I was seriously nutting up.

Last Friday evening with three days left on the break, my husband and son found me plopped on the couch, as intractable as my binders. 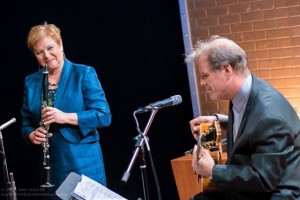 “Do you want to come with us to a show in Marietta?”

“You guys go and have a good time. I’m going to work on my writing.”

I listened to the truck pull out of the driveway and reached for my son’s gaming remote. I turned on the TV and scrolled down to You Tube.

In the search bar, I typed in “The Illuminati and UFOs.”

Five more minutes and I’ll go down to the basement.

I scuttled deeper into the sofa.

Wow, I didn’t know that ex-Presidents are working for some new world order!

The television droned on. I dozed off then jolted awake to fuzzy images of naked billionaires sacrificing goats at secret rituals deep in the California woods.

Goosebumps erupted on my arms as a male voice warned, “Wake up, people! The signs are all around us!”

The weekend vanished with only hours left.

I heard Wayne’s voice in my head, “You have four weeks…”

That’s what I did.

Now at the deadline’s midnight hour, I finished this and emailed it to the group. On Thursday, they’ll tell me they still have faith in me. Then on Friday, I’ll fling twenty-seven chapters onto my writing room floor and see what happens.

Photos 1 and 2 courtesy of Kim and David Chamberlain.  Photo of the Chamberlains by Tom Marnell, mineeyeshavescene.com.